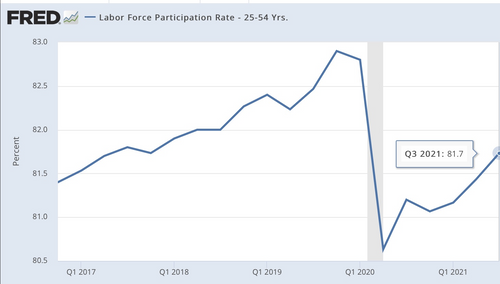 Chair Powell and others have bemoaned the allegedly sideways trajectory of labor force participation, while other commentators have taken an even more pessimistic view, assuming that a large swath of people who were employed just two years ago to be permanently unavailable now.

To evaluate the recovery correctly (and measure the true state of progress), it is important to appreciate two key points. First, if you're going to look at an employment-to-population ratio, a participation rate, or even an unemployment rate, adjust for age! Our organization is called Employ America but that doesn't mean employing every child and every senior citizen... If a person is of an age where they have both the means and the desire to retire, it is not a failure of macroeconomic policy or labor market policy if they choose to exit the workforce. To cut through the challenge that age structure imposes on aggregate employment statistics, it helps to focus on the prime working age cohorts (~25-54 years old). Younger cohorts are more likely to attain more education (usually good) and older cohorts are more likely to retire if they can (also usually good).

The second point (one that we keep reiterating) is that the line between participation and non-participation is incredibly hazy. The Current Population Survey cannot define that line accurately or consistently, but there is good reason to believe that more people who report to be "not participating" are still inclined to find work (Ahn, Hamilton 2021).

If you just looked at prime-age labor force participation in the 2010s, you would think something magical had to have happened in 2015 to transition from declining participation to rising participation. Was there some secret labor market reform that made it possible to hire more workers?

Looking at the prime-age employment-to-population ratio, the story is much simpler: the recovery and the expansion simply continued. And as it continued, more job growth came from those who were reporting to be out of the labor force (Tedeschi 2019).

The rise in prime-age labor force participation should be a clear signal not to treat participation and unemployment as independent processes. As this recovery has gained momentum, the gains have not been wholly driven by declines in unemployment, but by participation improvements as well. A full recovery in employment can be achieved if the rapid pace of the current recovery is given the chance to sustain itself over the coming quarters.

As the Fed Prepares to Slow Support, Attention Shifts to Rate Increases