Microeconomics? In My Inflation Analysis? It's More Likely Than You Think

The eruption of inflation over the past twelve months has created an interesting tension only made more salient by the War in Ukraine. Most prominent macro commentators – as well as the Fed – emphasize a “macro-dominant” view of inflation in which it is (understandably) disfavored to reason from individual price changes and supply constraints. Yet the Fed, as well as some of these macro commentators, often rely on “core inflation” metrics which will exclude the most direct effects of the War in Ukraine from analysis. While it may not be presented that way, this is indeed a form of reasoning from individual price changes and supply constraints. Managing these apparent contradictions requires some softening of otherwise hard-edged views. However, that softening must be guided by a pro-active causal inquiry: what are the reasons behind the current set of price changes and how do they compare to the typical reasons given as to why we should exclude food and energy prices from “core inflation” metrics?

As many have noted, the war in Ukraine is likely to push up headline inflation by pushing up prices from food and energy. Food and energy costs are often the prices where inflation makes its presence known to households, most especially poorer ones. If all the Fed responded to was the level of headline inflation, then the policy response to the war in Ukraine would, perversely, be to hike rates more aggressively in response. However, the Fed, like many other macro commentators, prefers to exclude movements in energy and food prices when making monetary policy decisions.

Yet commentators and policymakers typically treat inflation as a “macro” concept, one determined by aggregate forces rather than individual prices. As such, most economists disfavor reasoning from individual price component changes when analyzing and forecasting inflation. One sector’s prices might go down, but surely that should mean greater ability to exert upward pricing power in other sectors. However, the Fed and other commentators implicitly assume that this truism is unlikely to hold for two of the most salient and broadly-consumed categories – food and energy – which involve cash (rather than imputed) expenditures. Higher food and gasoline prices should – all else equal – reduce the amount of discretionary income households have available to spend on consumption in other categories, thereby reducing pricing power elsewhere.

How did we decide that food and energy prices were the special prices that would ever (and always) be worthy of excluding from analysis?

To varying degrees food and energy prices are, relative to other price components, excluded because they are:

Altogether, these reasons are most often explained as an “attempt to strip out or smooth volatile changes in particular prices to distinguish the inflation signal from the transitory noise.”

Even with these reasons in mind, it should be clear that not all food and energy categories fit this bill of reasons equally. Crude oil prices are highly globalized, but natural gas prices (relevant for electricity and utility gas services) are only episodically affected by global conditions; they vary substantially across countries. Consumer prices for food are sometimes affected by broader agricultural commodity price movements (August 2007, November 2010, currently), but many food categories are instead more sensitive to domestic retailing and wholesaling conditions (comparable to many household goods are included in “core inflation” aggregations). Nevertheless, these less-globalized prices might still face the kind of episodic volatility that proves to be more “transitory noise” than “inflation signal.”

If the above reasons are why we exclude food and energy from core inflation measures, food and energy may not be the only markets to which these reasons currently apply. The pandemic has amply demonstrated that, in an economy built from sprawling global supply chains, there are a number of arbitrary points where plant-level or geographic difficulties create shortages with limited substitutes, inelastic supply curves, and temporary pricing power. These dynamics may or may not be a good guide to aggregate economic conditions, yet nevertheless result in soaring prices as producers and consumers struggle to adapt. In highly capital-intensive production – the production of durable goods or oil, to take two examples – supply challenges can cause price spikes that are otherwise unrepresentative of domestic demand (and not otherwise offset by other prices).

Yet some have argued throughout the pandemic that introducing microeconomic arguments into inflation analysis - like, say, in the consideration of semiconductor or automotive supply chains - is overblown or not legitimate. They claim that, had the prices not spiked in these disrupted sectors, we would likely have seen the same level of inflation, just spread out through different sectors.

This approach often has an underlying “macro-only” vision of inflation, which claims that individual price spikes don’t affect the aggregate inflation rate. In lay terms, “if it wasn’t this group of visible supply shocks, it would have been another.” Individual price increases are assumed to always balance out so as to equal the correct “price level” given current macroeconomic facts. A more concrete – and highly relevant – argument along these lines might claim that the high prices and shrinking inventories of new and used automobiles are both straightforward consequences of elevated demand, rather than arguing that production disruptions caused shrinking inventories which in turn led to higher prices.

In more sophisticated forms of the argument, its proponents claim that the Fed will nimbly step in to offset any exaggerated increases or decreases in the prices charged by a specific sector with broad-based monetary policy actions. Even if the price decrease comes from a decrease in government payouts for healthcare services (and thus only saving money for the government, not households), the “macro-only” general equilibrium view holds that Fed policy will still provide a complete offset. The Fed will keep rates lower as a result of one disinflationary policy, thereby juicing demand and pricing power elsewhere. As we have noted, the Fed’s primary disinflation mechanism is fragile and imperfect, not the kind of thing that obviously gives rise to smooth offsetting effects or even compensating Fed action.

Yet many who make these “macro-only” arguments frequently use “core inflation” measures, which rely on the same kinds of microeconomic arguments. We would seem to have two incompatible stances:

If we resolve this contradiction by abandoning core inflation measures, then we have sacrificed a useful policymaking gauge purely in the name of reductive intellectual consistency. If we instead acknowledge that core inflation measures are in fact useful, we can resolve the contradiction by softening the edges of the “macro-only” stance. Doing so allows us to admit that the characteristics of food and energy markets that justify the creation and use of a “core inflation” measure can sometimes be found in other markets, most especially during periods of repeated economic shocks.

On a practical level, this means we should be actively evaluating whether other inflation components’ price changes are occurring for reasons similar to those which lead us to exclude food and energy. This evaluation is inherently time-varying and more important during times of economic upheaval. While inflation is broadly visible across price categories, the magnitude of the inflation overshoot is still concentrated in particular categories.

The goal should not be to build a profusion of different “core” and “super-core” indices; the goal should be to evaluate the causal mechanisms that are at play, so we can decipher how inflation dynamics might possibly evolve over time and what role the Fed should (and should not) play. The current moment has already led to a conflation of “supply vs demand,” “narrow vs broad-based” and “transitory vs persistent”...even though these three debates span three different dimensions of inflation dynamics. Since March of last year, inflation has accelerated, but the reasons for the acceleration are multiple and only a subset will be of value for how the subsequent 12 and 24 months will proceed.

Especially in the current moment, where monetary policy is nearly the only game in town for cooling inflation, it’s important to be clear about the mechanisms and uncertainty associated with monetary tightening. Even though monetary policy has more instantaneous effects on financial conditions and real economic activity, its effects on inflation operate with a longer lag for some underrated but well-documented lags.

We will never know in the moment whether a given rate hike will be enough to cool inflation (especially given the multiple causes of inflation in the current moment), yet this uncertainty and delay is all the more reason to carefully think through the causal arguments.

The fact that there are often opaque sector-level reasons for idiosyncratic price movements is not a reason to ignore them and claim that everything washes out in a general equilibrium framework. At the same time, we should resist the urge to opt for ad hoc exclusionary aggregations purely out of convenience. On a policy level, the uncertainty prevalent in these inquiries can seem like an excuse for shrugging our collective shoulders about the unknowable. This approach can strongly bias inflation responses towards heavy-handed monetary policy interventions that only become more obviously misguided in retrospect.

We have already written about how labor income and price inflation dynamics are aligning in terms of their signal for current FOMC actions, but that is only the beginning of the broader inquiry into inflation dynamics.  The present set of difficulties and complexities demand that we redouble our efforts to understand the cross-sectional and time-varying nature of pricing dynamics. Inevitable uncertainty about causal dynamics should not be an excuse to avoid the inquiry itself; that uncertainty should instead serve to mark a question where more careful thought and inquiry is required. 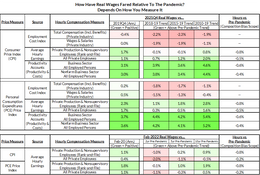